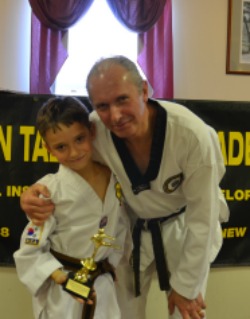 Student of the Month October 2016

Alex is 8 years old . He started Taekwondo when he was 6 . He likes to learn high kicks and the high brown form is his favorite form. He loves Taekowndo because  “it is fun”. He also loves to spar and train with the staff. He hopes to go to Korea after he becomes a black belt.

He also plays soccer and his team won the fall rec tournament at their age level. He also loves skiing as well and playing chess and Pokémon video games.